As many begin their journey in Tehran when first arriving in Iran, it may be a bit difficult to catch a glimpse of any sort of a traditional house or truly authentic Persian architecture. Due to the hasty modernization of Iran’s urban architecture much of the age-old craftsmanship of the past has been lost. Not at all to worry, however. There are still a plethora of exquisite examples of fine traditional Persian homes and architecture to be seen! One of the best-restored examples of this fine lineage of craftsmanship is, indeed, the majestic Tabatabaei House in Kashan. Come along with goingIRAN to learn and discover more about this attraction! 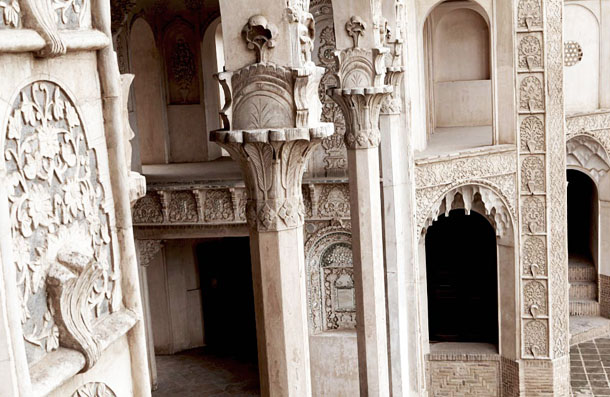 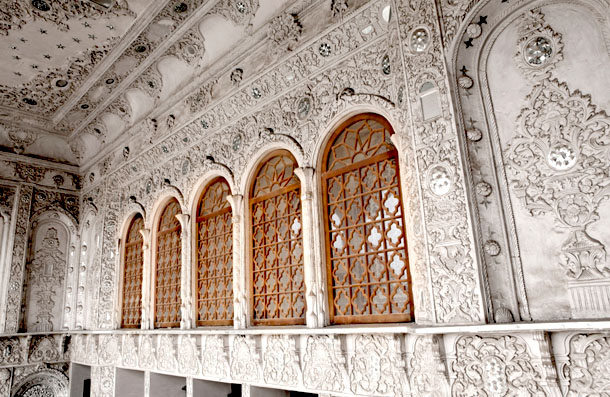 The magnificent residence was built in the 1880’s for the prosperous Tabatabaei family; very well-known and successful rug merchants. The Persian rug trade, being one of Kashan’s root economic industries, was where the immense wealth of this family came from. The delicately detailed mansion of the Tabatabaeis contains 40 rooms, 4 basements, 4 courtyards and three wind-catchers. This awe-striking mansion holds a great many gems and beautiful views within its confines. Many exquisite examples of delicate stained-glass, exceptional stucco carvings, mirrorwork, paintings, plasterwork, brickwork and much more! A fine specimen of traditional Iranian architecture portraying the resilience of long-mastered craftsmanship. The façade of the entire home is absolutely swathed in fantastic stucco carvings and moldings. The sky’s clouds reflection through the fine ceiling mirrorwork and stained glass windows come together to create infinitely unique and mesmerizing patterns on the floors of the courtyards and galleries. Every corner of the splendid mansion is eternally littered with stunning visual magnificence. 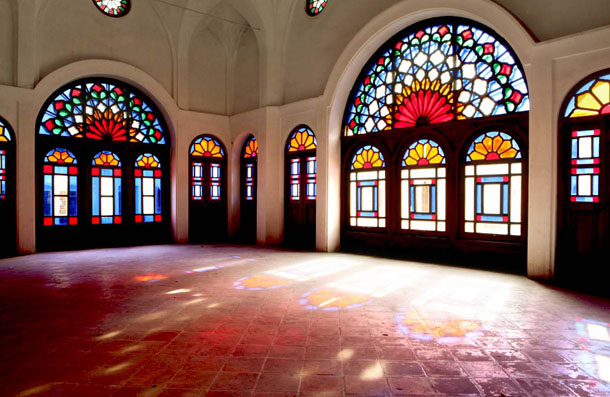 As the UNESCO chairman once said during his visit in 1993, “Kashani architects are the greatest alchemists of history. They could make gold out of dust”. He was referring to remarkable beauty and luxury that the past Persian architects created through the sole use of stucco. Being very inexpensive to produce and slather over raw bricks, the immense beauty and intricacies seen created in these houses were truly the works of master artists. Many of the breathtaking carvings seen here mirror the intricate floral designs and patterns of Persian rugs.

A lot of old knowledge and techniques have gone into the design of this and such traditional Iranian houses. A common feature, that is also seen here, is a sunken yard. It is the open area where beautiful garden plants flourish and the central pool (Howz) keeps an enchanting reflection of the magnificent home. Walking up towards the house, a wind-catcher built into the basement area and the front entrance plateau steal the eye’s attention. The wind-catchers are made with a very old technique and know-how. They are designed to catch and cool the scorching hot summer winds by channeling them through dark canals and passed small pools of water. As for the layered plateau that leads into the captivating mansion, its design is made in such a way to dilute any direct views into the home, as well as to act as a buffer between the interior and exterior weather conditions. Much of these traditional Persian houses were designed around Islamic etiquette; catering very much keeping the privacy of the residents. In order to do so, the building is designed in such a way that there is no view into the yard or the house from the outside, even if one were to stand on the roofs of neighboring houses! When in Kashan, make sure this hidden paradise is on your top 5 list!